Max Verstappen is one of the most exciting and talented drivers in the world of Formula 1 today. At just 25 years old, he already won two F1 titles and has already made a name for himself as a fierce competitor and a rising star in the sport. From his debut race in 2015 to his current status as a Red Bull Racing ace, Verstappen has consistently impressed fans and critics alike with his skill, speed and determination.

In this blog, we will take a closer look at Max Verstappen’s Formula 1 career, exploring his early life and career, breakthrough and success, records and achievements, challenges and controversies, and future outlook. We will examine how he has become one of the most talented and exciting drivers in the sport, and consider what the future holds for this young phenom.

So sit back, relax, and get ready to learn more about the one and only Max Verstappen, the phenomenal Formula 1 driver.

Max Verstappen was born in Hasselt, Belgium on September 30, 1997. He is the son of Jos Verstappen, a former Formula 1 driver himself, who competed in 107 Grand Prix between 1994 and 2003. Growing up in a racing family, it was clear from a young age that Max had a passion for speed and a natural talent behind the wheel.

At the age of 4, Max began his racing career in karting and quickly proved to be a force to be reckoned with. He quickly progressed through the ranks, winning multiple national and international karting championships. By the age of 15, he had already made the jump to junior formulas, competing in the European and World Karting Championships.

His impressive performances on the karting circuit caught the attention of Formula 1 teams and it wasn’t long before he was offered a spot on the Red Bull Racing junior program. He was offered a seat to compete in the European Formula 3 championship, where he quickly proved himself as a front runner, winning multiple races and earning a promotion to the Formula 3 European Championship the following year.

In 2015, at just 17 years old, Max Verstappen made his debut in Formula 1 with the Scuderia Toro Rosso F1 team. He took the F1 world by storm, with his impressive performances, becoming the youngest driver to score points in F1 and youngest driver to lead a lap, and scoring his first podium in 2016. He was quickly promoted to Red Bull Racing, where he continues to drive today.

Max Verstappen’s early life and career is a true testament to his natural talent and dedication to the sport of racing. From a young age, he had a clear passion and drive to succeed, and it’s no surprise that he has become one of the most exciting and talented drivers in the Formula 1 world today. 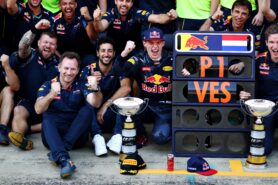 Max Verstappen’s debut in Formula 1 in 2015 with Scuderia Toro Rosso was nothing short of spectacular. At just 17 years old, he became the youngest driver to ever start a Formula 1 race. In his first race, he finished in 7th place and scored points, becoming the youngest driver to do so in Formula 1 history. He continued to impress throughout the season, earning his first podium at the 2016 Spanish Grand Prix and finishing the season in 8th place in the championship.

It was clear that Max Verstappen was a force to be reckoned with and his performances caught the attention of the Red Bull Racing team. He was quickly promoted to the team for the 2016 season, where he continued to make waves in the sport. He won his first race in 2016 Spanish Grand Prix, becoming the youngest driver ever to win a Formula 1 race, at the age of 18. He also became the youngest driver to lead a lap, and the youngest driver to set the fastest lap.

In 2017, he took his 2nd win in the Malaysia Grand Prix, and in 2018 he won the Austrian Grand Prix and the Mexican Grand Prix. He also took multiple pole positions and podiums through his career.

His driving style is characterized by his aggressive and fearless approach, often making daring overtakes and pushing the limits of his car. His ability to read a race and make quick decisions under pressure sets him apart from other drivers. He’s not afraid to take risks and push the boundaries, which often results in spectacular on-track action.

Max Verstappen’s breakthrough and success in Formula 1 is a testament to his natural talent, determination, and fearlessness behind the wheel. His aggressive driving style and ability to make quick decisions have made him one of the most exciting drivers to watch on the track. He has achieved many milestones and records in his short career, and we can expect to see many more in the future. 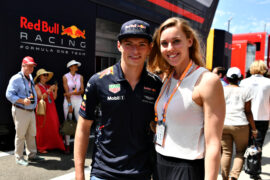 Max Verstappen of Red Bull Racing with Dutch swimmer Femke Heemskerk in the Paddock before the Formula One Grand Prix of Hungary at Hungaroring on July 30, 2017 in Budapest, Hungary.

Max Verstappen has achieved many records and milestones throughout his Formula 1 career, some of which include:

His records and achievements have not only made him a household name in the sport but also have a significant impact on the sport of Formula 1. Max Verstappen’s records and achievements have not only set a new standard for young drivers, but also raised the bar for the entire sport. His youthful energy, fearlessness and natural talent have brought a new level of excitement to Formula 1 and inspired a new generation of fans. 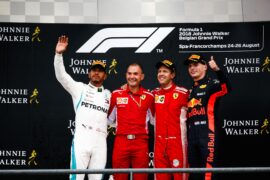 Max Verstappen’s Formula 1 career has not been without its share of challenges and controversies. Throughout his career, he has faced criticism for on-track incidents, such as collisions and penalties, and also off-track controversies, such as his comments on social media.

One of the biggest controversies that Max Verstappen has faced was his collision with Lewis Hamilton during the 2018 Belgian Grand Prix, where he was deemed to have caused the collision and received a 5-second time penalty. This incident received a lot of criticism and attention from the media and fans alike, and it was a major setback in his 2018 season.

Another notable controversy he faced was his comments on social media, where he received backlash for his comments on the FIA’s decision to penalize him during the 2019 Brazilian Grand Prix. His comments were deemed to have been disrespectful to the FIA and he received a public reprimand.

Despite these challenges and controversies, Max Verstappen has always shown resilience and determination to come back stronger. He has always taken responsibility for his actions and worked to improve his driving and behavior. He has shown maturity in his handling of these situations, avoiding any further controversies and regaining the respect of the fans and the sport.

These challenges and controversies have had an impact on his career, but they have also helped him become a better driver and a more responsible person. He has learned from his mistakes, and these experiences have helped him become more disciplined and focused on his racing. 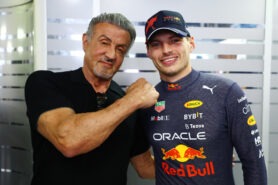 Max Verstappen is one of the most exciting and talented drivers in Formula 1 today, and his future prospects in the sport are looking bright. He currently has won 2 F1 drivers’ titles and still drives for Red Bull Racing, one of the top teams in the sport, and has consistently been a front-runner in all seasons.

The Red Bull team has nailed last year’s introduction of the new regulations in Formula 1. Because the coming season until 2026 will be based on last year’s regulations, the team will probably be the team to beat for years now. Therefor Max Verstappen’s future prospects in Formula 1 are looking bright.

He is a highly skilled and competitive driver and is currently driving for one of the top teams in the sport and has a contract with Red Bull until 2028. With this right combination of factors, it is possible that he will win even more Formula 1 World Championship in the future.